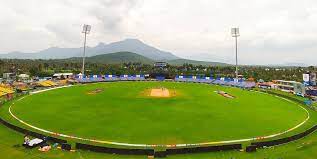 Salem Cricket Foundation Stadium (SCF) is a cricket stadium located in Salem district of Tamil Nadu, India. It was established in 2020 by Salem Cricket Foundation with assistance from Salem District Cricket Association and Tamil Nadu Cricket Association (TNCA). It is the biggest cricket ground in the state in respect to play area (90 metres (300 ft)). Chennai Super Kings started its Super Kings Academy in this stadium.

The stadium has five pitches, 12 practice-turf wickets, players pavilion and press box. It is also built with a drainage system which refills ground water periodically. The seating capacity is 5000 which can be increased to up to 25,000 during big events.

As of February 2020, construction of stands for audience and parking facilities were planned by the SCF and TNCA. The stadium is expected to host Ranji Trophy, Tamil Nadu Premier League and Indian Premier League matches as per the officials.

The pitch at Salem Cricket Foundation Stadium is well balanced for both batters and bowlers in white-ball cricket. Pacers get little help with a new ball in the powerplay overs but batters are likely to dominate this match.

Toss is not so important but according to the last TNPL matches winning record the matches was won by the side chasing the total. The pitch supports both batsman and bowlers so it makes an exciting game. So far the ground hosted 7 TNPL Matches where the side chasing the total won 4 matches and the side defending won just 1 and the left 2 matches were cancelled due to natural calamities.

Here is the last 5 TNPL Matches average scores of both Innings at Central Broward ground: