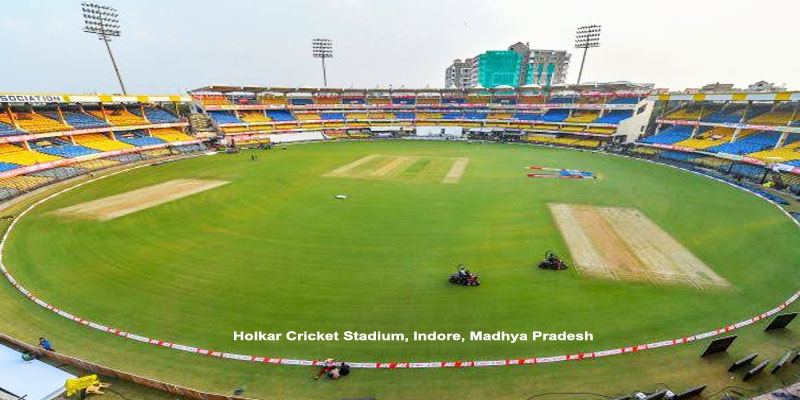 Holkar Cricket Stadium is located in Indore, India. It was earlier known as Maharani Usharaje Trust Cricket Ground. But in 2010, Madhya Pradesh Cricket Association renamed it after the Holkar dynasty of the Marathas that ruled Indore State. Indore city has another International Cricket stadium "Nehru Stadium" which was used for International matches until 31 March 2001.

It has a seating capacity of around 30,000 spectators. It is also equipped with flood lights for night matches. Virender Sehwag recorded the third highest ODI score of 219 at this ground. Gwalior's Captain Roop Singh Stadium, another international stadium in Madhya Pradesh, is a bit smaller than Indore's Holkar Cricket Stadium. However, capacity of Captain Roop Singh Stadium is more than Indore's Holkar Cricket Stadium.

The ground stages the majority of Madhya Pradesh cricket team's home matches in the Ranji Trophy. The stadium was selected to be one of the six new Test venues in India. On 8 October 2016, Holkar stadium hosted its first Test match when India hosted New Zealand for the third and final test of the series and became the twenty-second test venue of India.

The wicket at the Holkar stadium usually favours the batsmen. With even bounce and short boundaries coming into play, batsmen tend to rule the roost. On expected lines, Sehwag played with sparkle and fizz, and composed that record-breaking double ton against the West Indies in 2011. Even if we go further back in time to 2006, India chased down a target a 289 set by England with seven wickets to spare.

The Test Matches played here was in red clay soil, batting at this venue is much enjoyable and most batsman get help from the pitch. From the first day of the test, it seems to be a batting friendly-  pitch, once the match moves onto the final days of the test match, the pitched helped both batsman and bowlers to perform the best of them.

We can conclude that the average score in the 4 Innings in the last 2 test matches at Holkar’s Cricket Ground is comparatively lower to the first but higher in second innings, and with each of the subsequent innings, the average score is getting less. In last 10 years 2 Test Matches was hosted at these ground and both of the tests won by the home team India.

Here are last 2 tests matches average scores of both Innings at Holkar Stadium:

Although this is a batting pitch, ODI teams prefer batting first because of the pitch conditions which is favourable for the batsman then from the bowlers. The ground has dry pitch and it supports batsman and swing bowlers when it’s overhead weather conditions which then supports swing bowlers. The total of 2 matches played here in last 10 years and each was won by the home team INDIA.

Here are last 2 ODI matches average scores of both Innings at Holkar Stadium:

The teams winning the toss at T20I matches usually prefer batting first because the ground has a punching/batting pitch. Since the T20I matches is played for the day and night, it depends on the side winning toss whether to bat or bowl looking to the weather conditions and the strength of there playing 11. In addition, it is hard to conclude based on only 3 T20I matches.

Here are the last 3 T20I matches average scores of both Innings at Holkar Stadium:

This stadium is supposed to be the paradise for the batsmen. It has a flat pitch which gives a bounce and resulting from that the ball comes on the bat well. It has a lightning-fast outfield and has an altitude of 600m above the sea level that makes it valuable for batsmen. The pitch eventually helps the spin bowlers too so as seen in last matches the spin bowlers proved to be beneficial assets on this pitch.

Here are last 5 IPL matches average scores of both Innings at Holkar Stadium: